Leeds City Council is seeking approval from Planning Inspectors to remove Green Belt status from four key sites in Aireborough, following which large housing developers will be encouraged to build new estates there before 2023.

The deletion of these Green Belt sites is completely unnecessary;  they still play a significantly role in the purposes of the Green Belt and are high in natural capital value.  Moreover, Leeds can fulfil its housing need  on other brownfield and non-Green Belt sites that have already been allocated for housing.

After falls in official projections for household formation, Leeds’ housing need between 2012 and 2028 (the core strategy timeframe) is calculated to be between 42,384 (Government figure) and  50,000 (Leeds calculation), this allows for reasonable growth in employment.  Leeds have built, issued planning permissions or have allocated non- Green Belt land in the SAP for around 57,500 houses between 2012 – 2028.  In addition,  the last 2006 Urban District Plan allocated greenfield sites for future house building;  there are 5,383 of these still not used (Table 4), some of which have developers wanting to build on them; (these are called PAS or Safeguarded sites).

When Can Green Belt Be Deleted

The Government has said, and the Planning Minister reiterated in Parliament only last week (6 Feb 2018)

“Green Belt boundaries should be amended only in exceptional circumstances when local authorities can demonstrate that they have fully examined all other reasonable options for meeting their identified housing requirements.”

After looking at the evidence we consider the current Leeds Site Allocation Plan to be unsound in a number of areas.  In particular, the evidence does not justify the plan, and is not consistent with either the Leeds Core Strategy, or the National Planning Policy Framework (NPPF).  Neither is the plan positive, as it has not objectively considered all the needs in Aireborough including infrastructure, facilities, landscape and green space, and plans to expand Leeds Bradford Airport.

Leeds are suggesting to the Inspector, that the Aireborough Green Belt sites they wish to delete:-

So let’s look at the evidence – here is our 2017 SAP response, below key points:

The most significant Green Belt (GB) purpose of this site is that it stops Menston and Guiseley from merging.  Not only is this acknowledged in the Bradford Growth Assessment of 2013, but in a previous Inspector’s report on the Ings site the Inspector concluded that “I regard the continued openness of this land as fulfilling all the functions of separating the two existing communities of Menston and Guiseley and the contribution the site makes to Green Belt is so great as to override the need to identify land for immediate or possible longer term residential development”

Leeds City Council conclude that –  the site would not merge the settlements,  is not important in safeguarding the countryside from encroachment, and would round off  ‘the settlement’.

In terms of sustainability,  the Ings is less sustainable that a large number of sites across Leeds, both Green Belt and greenfield.  The sustainability score for the Ings is a large minus,  mostly because it is the floodplain for Mire Beck and a Zone 3 flood risk (the highest).  Further, it is part of an important habitat corridor, contains good agricultural land, and in the Aireborough Landscape Character  & Value Survey was identified as a site that should be part of the strategic Green Infrastructure that is so important for sustainability.

There could and should be a small amount of development around Birks Farm to regenerate that area.

This site performs very well on 4 of the 5 purposes of Green Belt, and contributes to the 5th – keeping Yeadon and Guiseley from merging, especially if more houses were built at the back of Banksfield and Coppice Wood – which could still happen as this site was linked to the Banksfield site as an urban extension in original plans.   It is especially significant in preserving the setting and historic character of Guiseley as it is part of the Medieval Field system – an issue that Historic England are concerned about.   In the Aireborough Landscape Character and Value Report it was identified as a place where the built-up area is in ‘tension’ with the neighbouring open landscape character, and that the “Wills Gill landscape is fundamental to the character of Guiseley. This point of connection is already squeezed to its limit and could easily be lost”.  This is a conclusion that has also been reached by Leeds Planners in the past when they have turned down other housing applications in the area. In original assessments Leeds admitted that this site “performed a role in safeguarding the countryside from further sprawl“.

In terms of sustainability the score for Wills Gill is a large minus – worse than a number of UDP PAS sites.  Access on to Queensway is poor and Highways have said this is an issue.  The site is also important for ecology networks.  But its biggest failing is the effect on the character of an important historic are, and the potential for sprawl.

The important thing about the Green Belt in this location is that it is significant in stopping urban sprawl between Guiseley and Baildon along the A6038 (source Bradford Growth Assessment 2013).  It is also significant in stopping the countryside from encroachment, and is actually part of the West Yorkshire Strategic Green Infrastructure.  Leeds say in their core strategy policy SP6  that housing  allocations should have the least negative and most positive impact on green infrastructure. Where such sites are allocated the function of the land should be retained and improved. (There is nothing in the SAP Hollins Hill site details on this).   The Aireborough Landscape Study also identified this area as a point of tension between the built-up area and the countryside character.   And,  this site has not been evaluated for its effect on the setting of the nearby listed buildings.

Leeds City Council conclude that – the site has a low potential to sprawl, does not safeguard the countryside, and would only have a marginal effect on the listed buildings.

In terms of sustainability, taking away this field will destroy the viability of a working farm.  Large road changes will have to be made at the top of Hollins Hill to accommodate access, and the site has very limited access to facilities.  Further comments on land stability due to old coal pits have not been taken account of.  It scores a high minus on the sustainability appraisals; certainly higher than many of the UDP PAS greenfield sites.

It is hard to think of a more unsustainable site, being sited next to the end of an airport runway.   Conversely it is a good site for ecology as it is in the West Yorkshire habitat network area and next to the Tarn conservation area.  It should be enhanced by being made part of the Tarn wetlands

In Green Belt terms it does not perform as well on purpose as the other sites above – but it does stop encroachment of the countryside, as far as the Tarn is concerned, and it does encourage urban regeneration if it is not allocated. 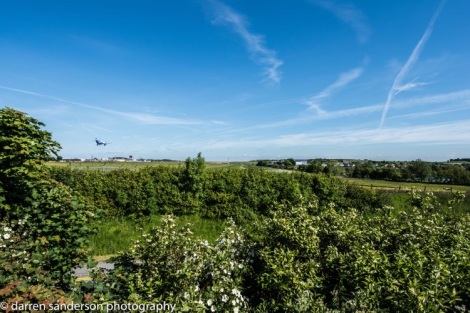 Victoria Avenue – is right next to the Airport runway; better used as an ecological corridor.

The other change in the SAP currently being consulted on are the Aireborough Green Belt sites that have been put into Broad Locations.  This means that the sites could be used between 2023 – 2033  if Leeds think they are needed following their current review of housing figures.  These GB sites are

We have very stong concerns over the status of Broad Locations – no other Local Authority in England has used this method of putting Green Belt ‘on ice’.   We are consulting with other groups as to whether this is compliant with the NPPF and the idea that Green Belt should be permanent unless there are exceptional circumstances.  We greatly fear that when housing targets are reset, these sites too will be deemed more sustainable and fulfill less Green Belt purpose than other sites – especially as there is now no allocation for a new school in Aireborough.   This status is certainly not an encouragement for urban regeneration  – which is a purpose of Green Belt.  These sites are still in danger of being allocated to housing, given our knowledge of what is happening in the Core Strategy Review.

Every Local Authority has to keep a register of brownfield land.  Here is the register for Leeds, you can also add further sites for consideration.