Hawksworth and Tranmere residents have asked us to bring these planning proposals to the attention of local people and the Aireborough Neighbourhood Development Forum members,  so that the community has chance to make initial comments to relevant people.

In January 2014,  Leeds Planning refused permission for an industrial sized wind turbine (height 74m) on The Odda, Menston, behind and quite close to,  the historic 400 year old High Royds Hall.    The application was refused for a number of reasons, including environment, health and ecology,  with the overriding conclusion that it was an inappropriate development for a special  landscape area.

Recently,  a number of local residents have received a letter from  consultants Cromwell Wood Estate Company Limited,  asking them for their views on a new wind turbine (height 45.7m), in the same location.   This is a pre-application consultation, as planning require some community engagement first.

If anyone would like to respond to Cromwell Wood about this pre-application consultation,  please email  to cromwell.wood@gmail.com.  Their letter is below. 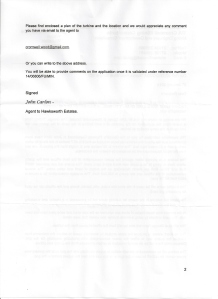 At a meeting of the Hawksworth Residents Association of 19th January,  local residents heard about an idea from local land owner, John Ogden,  to build an access road to service the Quarry on Odda Lane.  This is only an idea at this point,  not a firm planning applications.

The road would go from Hawksworth Lane coming out at a gateway about 50 yds from the junction with Thorpe Lane.  It would then cut up through the field (which has recently been rejected for housing) and would run along the North side of the wall along the hill top behind Hawksworth Hall and on along the hilltop to the quarry.  There is currently a very popular footpath along this route that’s regularly used by locals and visitors.

The advantage to Hawksworth Village would be that the 40 ton quarry lorries, needed to transport stone to places such as Scotland, would not have to go through the Village as they moved to and from the Bradford Rd.   Although alternative arrangements could be made to exit via the Bingley bypass.

The disadvantage is that 40 ton lorries need a substantially constructed road, which is both very expensive and not in keeping with what is currently a Special Landscape Area, displacing the public footpath and destroying the rural tranquility.   In addition, if the construction of a fully tarmacked road was allowed, this might rekindle the application to build on the land as its landscape status may change.  Finally,  the lorries would be using the very busy, and difficult junction of Bradford Road and Hawksworth Lane, where there are already a lot of complaints about hazards; whilst the traffic lights which should have been erected there are still in eternal discussion with the High Royds developers as part of their planning permission.

If you have views either positive or negative, for or against this idea, as there are competing interests, please write to Guiseley and Rawdon Councillors.