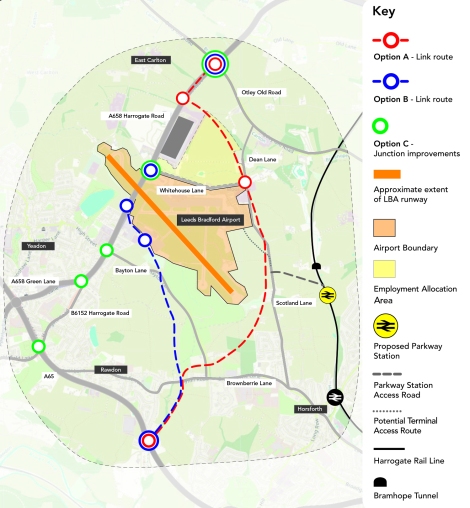 Leeds City Council, West Yorkshire Combined Authority and partners Bradford Council and Leeds Bradford Airport (LBA) are now in a position to consult on further detailed options for improved access to the airport.

Leeds Bradford Airport (LBA) Parkway Station
A new Parkway rail station located on the existing Harrogate line, with a regular shuttle bus link to Leeds Bradford Airport’s terminal building. The station would also have a park and ride facility for journeys in to Leeds or North Yorkshire, and improve accessibility to existing and proposed businesses in North West Leeds.

Click here for more information on the LBA Parkway Station.

Option A: Building a new road and footway/cycleway from the A65, running along the eastern edge of the airport before joining the A658 to the north.

Option B: Building a new road and footway/cycleway following the same initial route as Option A, from the A65 but running to the south west of the airport, joining the A658 before the tunnel under the runway.

Option C: Upgrading the existing A65 and A658 around Rawdon and Yeadon to the airport. This would see junctions upgraded and, where needed, some localised road widening to deliver the junction improvements.

LBA Proposed Employment Allocation
In addition, there are proposals for an employment site to the north of LBA. This is provided for information only and does not form part of this consultation.

This phase of consultation is open from 18 February until 12 April 2019 and your feedback will help inform the development of both schemes.  Full details can be found here.

You can get in touch and have your say in a number of different ways: