Housing need, and land allocations can feel very much like calculating Soviet tractor statistics, here we try to pull out the current key figures and points in the Leeds Local Plan, and at the end give details of how to respond to two current consultations on these issues.

In September 2017, the Government announced a potential new way of calculating housing need for Local Authorities (LA) – making the calculation nationally more consistent, instead of leaving it to LAs individually.   They calculated that the Leeds’ housing need between 2012 – 2028 should be 42,384 net; 39% lower than original target Leeds City Council (LCC) .  This figure includes an amount for reasonable economic growth.

Following another look at their housing OAN at the end of 2017,  LCC have decided to adopt a new housing target of 51,952, BUT NOTE this is from 2017 – 2033, so 5 years beyond the current Local Plan. (This target is currently the subject of a consultation see below).

LCC have decided to go for a figure higher than the Government’s calculations because of proposed greater economic growth in the City.  Details of need can be found in their Strategic Housing Market Assessment 2017 (SHMA).   The SHMA estimated a housing need based on different scenarios of between 44,240 and 60,528 between the new plan period of 2017 and 2033.

To get to a figure for the amount of land LCC needs to allocated in the Site Allocation Plan (SAP) (under current consultation until 26th February 2018), LCC deem that 6,096 housing units will be built on windfall sites that they did not know would become available in the plan period.   So if we reduce both target need figures by that amount, we get

In the original 2014 target of 66,000, the Green Belt was earmarked to provide 12,385 housing units.  So a reduction of land needed for allocations to 53,615, would mean no Green Belt was needed, if all other land supply stays the same, ie no more new land is forthcoming.  In essence, LCC’s new target of 60,000, means that 6,000 houses are needed on Green Belt, unless other options come forward before the year 2033.  That could be

The law on green belt is that it should not be deleted unless there are exceptional circumstances and all other options have been looked at. 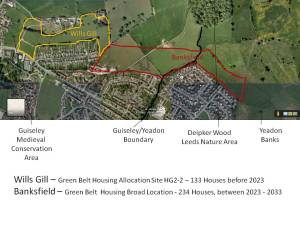 The current SAP is still planning for the housing need target of 70,000.  However, the SAP Planning Inspector indicated in October 2017 that the review of housing figures was pertinent (material in legal terms), and that Green Belt could not be deleted unnecessarily.  The LCC response, has been to divide the 12,385 units of Green Belt as follows

The issues with this is that

People tell us that the Leeds response forms are difficult to understand if you are not a planner.  LCC have said they accept all responses to the relevant postal address and email,  it is helpful to them if you can make sure responses reference the section of the plans you are commenting on, and the relevant sites.  That can be put in a reference at the top of the correspondence.

We also encourage people to write to their local MPs so that they are aware of people’s views on this complex subject.  Planning law is currently being revised.   Local MPs are