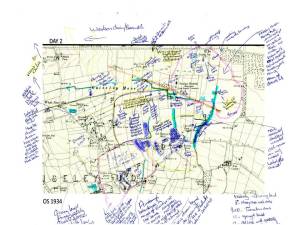 Recording in the field

In his Sandys Lecture for Civic Voice on 31st Mach,  famous urban designer Sir Terry Farrell, said that place and landscape should be at the start of proactive planning.  As he spoke,  21 volunteers in Aireborough were doing just that – recording the details of the local landscape, to input into the emerging Neighbourhood Plan.  Their verdict ‘it is amazing what you see when you really look, and know what you are looking for’;  there was also agreement that they had discovered places in Aireborough they never knew existed, both beautiful and horrendously degraded.

Planning policy is very clear, that landscape character and its sensitivity to changes are a key consideration when making decisions on where development should go.  So, the Aireborough Neighbourhood Development Forum, set out to firstly map and value the Aireborough landscape, and secondly report on its ‘sensitivity to change’.   The Leeds report on landscape character in the City was done in 1994, and although a solid piece of research at the time, is not detailed enough to really get to grips with planning in Aireborough 2016, given all the local issues. 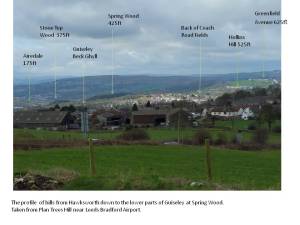 The Forum therefore commissioned professional Landscape Architect, Tom Lonsdale, ex head of the subject for Mancheste City Council, to undertake the study with the help of the volunteers.   Tom, firstly, taught everyone the relevant techniques for observing and recording – then over Easter the intrepid band spread out over the whole area, from Hawksworth Moor to Yeadon Moor, Nether Yeadon to Surprise View to dig out information, on – topography, hydrology, ecology, land use, access, views, and landscape cells.

This work is now complete, and Tom is now in the analysis stage, working towards a final report – probably the first ever for Aireborough with such a fine grain of detail.   The work will also feed into other work on Ecology, Flooding, Design and Green Space improvement.

Do you know where this areas of Aireborough is? What historic features it shows, and what that view is?

We’d like to thank the following volunteers for all their very hard work (and all friends and family were were taken on an unexpected walk).