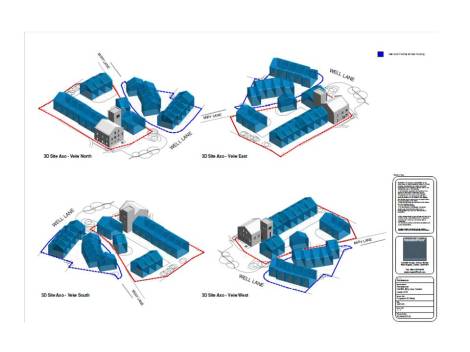 The current proposal is to turn Old Dog Mill into 23 houses and 2 flats, and has been supported in principle by Leeds City Council, including Chief Planning Officer Tim Hill, since early 2015. However, just looking thought the list of current comments on the application – there is not much support from anyone else for this scheme.

The site is designated as a town centre (which is supposed to be developed for vitality and viability). It is also part of the Yeadon conservation area, and right next to Engine Fields, a Local Nature Area, and a beck which is a Wildlife Habitat Network.

On top of which, it is a character building giving ‘local distinctiveness’, and could be put to many more useful ‘town centre’ purposes, to do with cultural and leisure facilities, as well as employment, workshops and micro-business hubs. It will also be right next to the new Aldi.

It is worth reading through the current commentsand making one of your own, of particular note is the comment from Heritage England, who have NOT been consulted in the pre-application stage.  It seems obvious that so much more could be made of this ‘corner of Yeadon’, than knocking down another piece of heritage and crushing 23 tiny houses into a small space. That is not to say, that some of the mill could not be used for residential flats, as well as other more vibrant uses.

The ANDF’s response is here.   We are also looking at this site as a potential site for a properly designed mixed use scheme in the Neighbourhood Plan, together with the neighbouring area.