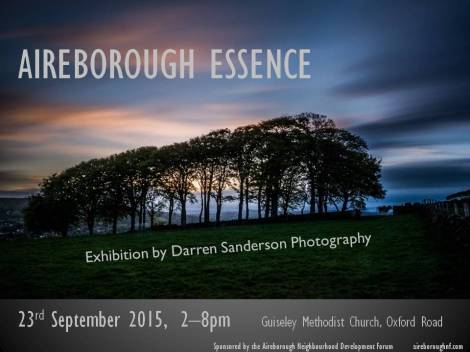 As promised back in July,  we have been capturing Aireborough’s distinctiveness in photographs and maps since the spring.   So, the Aireborough Neighbourhood Development Forum is going to have an exhibition of Darren Sanderson photographs, called ‘AIREBOROUGH ESSENCE’, on 23rd September 2015,  2-8pm in Guiseley Methodist Church, Oxford Road.   The exhibiton will be held at the same time as the Leeds Drop-In consultation on the housing, green space, retail and employment site allocations – and is an important part of the Neighbourhood Plan evidence base.