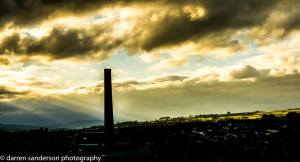 View over Aireborough from Rawdon. Whale Jaws Hill in the distance. (With echos of Turner’s painting Hannibal Crossing the Alps, 1812, based on a storm over the Chevin.)

The Landscape Character of Aireborough is vitally important when thinking and planning for the future, as we explained in this post from March this year.

Aireborough is border country; and therefore has some unique characteristics – we sit on the border of Leeeds and Bradford, on the land where the urban area of those Cities meets rural Wharfedale – an area of urban rural fringe important for ecology and habitat networks.

Morning mist over the natural tarn at Yeadon

We are on the border of the South Pennines natural area, and the Yorkshire Dales,  and between the millstone grit of the Pennines and the Coal Measures of West and South Yorkshire – natural features that helped define our buildings and industry.

Hills, long distance views, becks, natural woodland, and a landscape shaped by natural forces and human endeavour,  all play a part in what makes us ‘different’, and we need to ensure that we, and others, understand what that means to future plans and enhance it.

Historic meadows at the Ings on the Mire Beck border between Guiseley and Menston. Potential housing site 3026.

With this in mind,  we asked Professional Landscape Photographer, Darren Sanderson, who is from Rawdon, to capture Aireborough’s Landscape Character – starting with the sites that Leeds City Council have  earmarked for potential development.   Darren has been working closely with the Aireborough Neighbourhood Forum’s Site Co-Ordinators sub-group of local people, who have been producing the site sustainability assessments, copies here.

Here then is Darren’s Gallery of photographs, that is building up into our ‘love story’ of the area so many people care so much about.