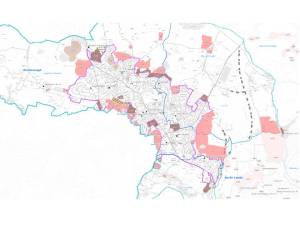 Reports on the proposed housing site allocations to meet Leeds’ aspirational, 70,000 new housing target have been published today. They show that Aireborough’s housing target has increased from 2,300 to 2,366 between 1 April 2012, and 2028; with nearly two thirds of this being on green land.   You will find the reports here.

In spite of Leeds City Council making a big official ‘song and dance’ about saving green fields, and protecting green belt with their housing site, 53% of Aireborough’s housing target is proposed for green belt, with a further 5% on green fields,  making a total of 58% on green land.  Then, there is  another 6% on mixed sites, which brings the total green land to be built on to just over 60%, the majority around Guiseley.  This includes, Wills Gill,  Ings Lane, Coach Road, and Hollings Hill.   It also includes Gill Lane, Nether Yeadon, and Banksfield, and  Harrogate Road, Yeadon.

Brownfield land, makes up just 36% of the total land allocated, and has mostly all beeen built on already eg Springhead Mills and Netherfield Road; or has outlined planning permission eg the Naylor Jenning site

In addition, Leeds has added a further 316 houses they want as a contingency plan, all of which is on green belt – this is called PAS (protected area of search) land. This will mean this land will be declassified as green belt, and made green field and thus be in much greater danger of being developed, should Leeds fall behind on its 5 year land supply.

The proposed site allocations with be discussed at a Development Plans Panel on 13th January 2015. The purpose of the meeting will be to confirm the allocations. They will then go to Leeds Executive Board on 11th February, and, if approved there, the proposals will go out to public consultation sometime in late Spring. Following that, the proposed allocations, and the public responses to the cousultation, will be examined by a Planning Inspector, before the outcome is finally adopted.

If you are interested in employment, retail, and green space site allocations, then the meeting for these is tomorrow 6th January 2015. Details of these are here. You will notice, that apart from around the Airport, no further employment sites have been identified.

Leeds launched its site allocation proposals at a press conference at 1pm today (5th January),  unbeknown to many Councillors and MP’s.  Leed City Council Deputy Leade,  Cllr Peter Gruen,  stressed to the press, that they had taken care to save green belt land and encourage regeneration in the City, and that overall in the City only 35% was green land, and 65% brownfield; ” some areas having 30%+ green belt targeted and others nothing at all” said Cllr Gruen.  (Obviously this is the reverse of the situation in Aireborough,  where nearly 65% is green land and 36% brownfield.)

Cllr  Gruen also said that each area had to take its fair share of housing.  However, in TV and radio interviews tonight, Pudsey MP Stuart Andrew said that ‘Aireborough has already taken its fair share of development in the last 10 years on our brownfield sites, and now the area needed the infrastructure that has not yet been put in place – not, more unsustainable houses’.

The Government strengthened the situation regarding green belt and development in October 2014; stressing to Local Authorities that green belt boundaries were not to be changed, or development permitted there, unless there were exceptional circumstances – and that housing targets were not an exceptional circumstance.    In addition,  the Planning Inspector in his report on the Leeds Local Plan, stressed that a comprehensive review of the green belt and its purpose was required by Leeds as part of their site allocations, in order to find the ‘most suitable land’; not the partial review Leeds were undertaking.   It does not appear that Leeds City Council have taken either statement into account in their proposed site allocations.

* UPDATE. The target for new housing in Leeds is 70,000 between 1 April 2012 and 2028.  Of this 66,000 is on allocated sites and 4,000 are classed as windfall sites, brown field sites such as old mills that become available for housing unexpectedly.   In addition,  Leeds are planning to replace 4,000 old homes, which actually makes the total new build of houses to 2028, to 74,000 gross.  This needs to be made clear, as some of the press eg Yorkshire Evening Post, are reporting incorrectly that the new housing target has been reduced by 4,000 to 66,000.

“Leeds City Council today (Monday) unveiled the locations of 66,000 new houses it is planning to build by 2028 as it bids to meet growing demand and tackle the city’s housing shortage. The figure is 4,000 less than the previously predicted 70,000.”  Source Yorkshire Evening Post, 5 January 2015

1.  The comprehensive sustainability reports for each of the sites
2.  The comprehensive green belt reveiw that the Planning Inspector required on approval of the Core Strategy
3.  The Leeds report on what they have done about the comments made on the sites in the Summer 2013 site allocation issues and options consultation.
4.  How many houses and of what type have been built in Aireborough between 2000 and 31 March 2012
5.  What infrastructure and facilities have been provided in Aireborough to support development between 2000 and 2012
6. What new employment opportuntites have been provided through the planning system between 2000 and 2012
7. How has green space been improved between 2000 and 2012.
8. On what basis were large amounts of Aireborough’s green belt taken out of the category ‘special landscape area’, in the 2006 Urban Development Plan.