Neighbourhood planning is not about producing a plan; the point of localism is melding a range of people into a decision making unit.  It’s about residents and businesses working together to make a better ‘place’ for the many, and all the hard choices that entails.  It is not simply a question of someone from the Council ‘popping up’ and  saying ‘would you like this’,  yes or no, then going away again; that is consultation.    Eighty per cent of new products fail, because they are based on consultation,  rather than needs based market research.   I don’t have the figures for the failure rate of local plans to satisfy ‘residents and businesses’, but ………………… well I’ll leave that to you to make up your own minds.

For many years now,  planning, where there is any community involvement at all besides putting a tick on an election slip, has been run on the consultation model.  Plans have been left in the library, for the populace to consult and make their comments.   Now, neighbourhood planning, is about ‘the community’ gathering the evidence for what it needs, generating the ideas and putting it together in a plan.   There are many good reasons for being cynical about such a process, but that doesn’t mean it is impossible, or should not be explored as an opportunity. Hence,  the Aireborough Neighbourhood Forum, has spent time and energy on workshops and events – trying to figure out how this might work.

We were therefore delighted when Simon Toyne, Integrated Services Leader for Aireborough Extended Services,  spoke to us about his ambition to get the voice of ‘young people’ into local decision making.  He felt that adult led, consulting with ‘young people’  was a decision making mirage – young people saw that and often stayed away. What Simon wanted was a vehicle for real participation,  and neighbourhood planning seemed an opportunity worth trying. 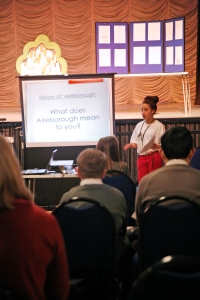 So, from December 2012 Simon worked to recruit, train and hand responsibility for the first Aireborough Youth Conference to a group of six young leaders: two from each of Aireborough’s senior schools,  Benton Park,  Guiseley School, and St Mary’s Menston.  Their task,  to look at the question of what it was like to ‘grow up in Aireborough’:  their output,  to run a conference for their peers on ‘Growing Up in Aireborough’.   Simon was adamant the work should be that of the ‘young leaders’,   adults were simply there to open the ‘skills cupboard’, and facilitate the planning meetings with drinks and biscuits :-).

The result of all the hard work was the Conference held on 27th March 2013, from which the ANF has got a wealth of information on what young people like, dislike and would like to see in the area.   But,  what is equally important is that a group of young leaders has emerged who have a sense of pride in what they have achieved and who will be able to help work on the neighbourhood plan.  Not only that, but, they have taken on a task that …… well it wasn’t on their ‘cool’ barometer ….. overcome the fears of public speaking to their peers, and learnt new skills such as place awarness, and facilitation.

So will the mirage turn into reality?   Well, the research is now part of the input to the neighbourhood plan,  and Simon is basing his 2013/14 action plan on the results.   That of course means we now have the voice of young people ’embedded’ as one element in our evidence for how to make Aireborough a better place,  and a team of individuals who can help with the work there is still to do.