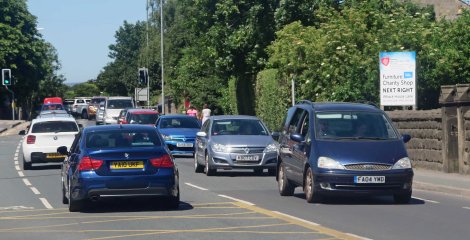 In Summer 2018, parts of the A65 and A658 in Aireborough were tested for air pollution – the results show that the tested areas were all over the legal limit, and as bad as anywhere In Leeds.

The tests were organized with Sustainable London by Clive Woods of Aireborough Civic Society and Aireborough Neighbourhood Forum. The project was funded by the Esmee Fairburn Foundation following the announcement that Leeds is one of the most polluted cities in England.

The tests for pollutant nitrogen dioxide were set up by volunteers at busy places on the A65 and A658 in Yeadon, Guiseley and Rawdon. The air quality was checked from June 5 until July 1. The four places  monitored were

1.Near Kirk Lane junction on A65
2. Near the junction of Yeadon High Street at Harrogate Rd A658
3. Near junction of Apperley Lane with Mickelfield Lane, on the A658 Rawdon
4 Near the Station Pub on A65 Guiseley, but this was stolen so there are no results.

Other places in Leeds were tested at the same time, after being nominated by other community groups. The test sites were chosen as they were next to or near residential areas. The seven other sites were

The results are “extremely worrying”. Of the ten test sites in Leeds the most polluted was the A658 in Yeadon at over twice the legal limit of 40 micrograms of nitrogen dioxide per cubic metre of air per day. The two other sites in Aireborough, one on the A65 near Kirk Lane and the other in Little London, Rawdon were also over the legal limit.

Clive Woods, said: “These results are extremely concerning. It is even worse than we expected. We know that our roads are some of the worst for congestion in Leeds, and congestion is the cause of these illegal levels of pollutants. Not only are the roads busy at peak times Monday to Friday, but they are worse at the weekend. Most other parts of Leeds do not have such a problem of standing traffic at weekends.”

“It can only get worse with proposals to build another 1,300 homes in the area– which means thousands more cars on our roads. Add on Bradford’s plans to build hundreds more new homes in Menston, Burley, Ilkley and Apperley Bridge and the pollution situation becomes intolerable for us all.”

“We were very surprised that Leeds City Council did not include Aireborough in its own Pollution Measures. At the consultation we asked to be included but were ignored. Leeds should now look to include Aireborough, as well as Pool and Otley in anti-pollution controls.”

This situation is crucial for a sustainable area, and for public health.  LCC needs to be finding ways to improve the current situation and not making it worse – the ANDF will certainly look to do what it can in the Neighbourhood Plan including a proposed circular Aireborough cycle route that links to both the Canal through Esholt and Wharfedale, and mapping out ideas for a ‘green route’ along the A65.   It is however, amazing that current proposals for a Leeds Clean Air Zone do not include Aireborough. ”

To find out more about the situation, there will be a Question & Answer Session organized by Sustainable London next Tuesday Evening, 6th November, 6pm at LEEDS TOWN HALL.

Clive plans to do more monitor tests over the winter when air pollution tends to rise.