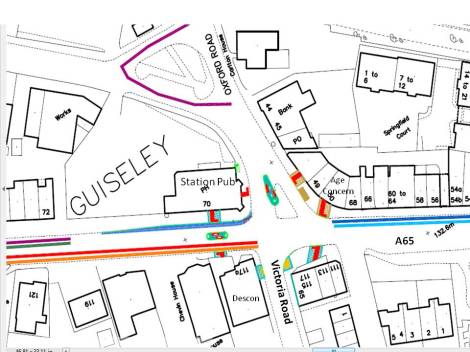 Leeds City Council Highway Department has let us know the new junction arrangements for the Station Pub Cross Roads Guiseley  (Where Victoria Road and Oxford Road meet the A65).  The work will start on Monday 27 July and will run for six weeks. It is likely that it will complete the last Friday of the summer holidays (4 September) but may run into that weekend if there are any unforeseen issues.    Relevant traffic diversions will run throughout August.

Victoria Road: No formal crossing provision, but will receive dropped kerbs and buff tactile paving. Traffic can turn left and right or proceed straight on as usual. However, traffic turning left will be held at a secondary set of signals by the refuge on the A65. This allows a ‘green man’ phase for that section of the A65.

A65: New refuge island to be provided between Station Hotel and Descon (the old Police Station). Footway to be narrowed outside Station Hotel by 1m to accommodate the new refuge,  with appropriate widths remaining for carriageway. Traffic can proceed in all directions, but advisory signage will be erected to advise drivers of HGVs to not turn left into Oxford Road and to proceed to the gyratory and come back to the junction. The left turn is too tight as they cannot swing appropriate. Surveys have shown that the number of HGVs (these being articulated vehicles mainly, rather than smaller delivery vans) is low and will not unduly impact upon the traffic flow in Guiseley. The refuge will have formal red/green men phases for pedestrians. The phase between the Station Pub and the refuge will be green when the A65 is on red. The phase between refuge and Descon will be green when Victoria Road is a green light for traffic, as described.

The crossing that currently runs between Dale Eddison and the Oxford Road refuge is relocated to run diagonally to the pavement outside Age UK/ Halifax. This will provide a green man when Oxford Road has a green light for traffic, see below.

Oxford Road: Existing refuge island to be removed,  and new refuge constructed. All traffic will proceed to the left hand side of the new refuge.  Coming down Oxford Rd to tha A65, There will be two lanes. The left turn will be a left turn only lane, the right lane for proceeding straight to Victoria Road and turning right to A65. When the right hand lane is given a green light for traffic, the left lane will be held on red for a short period. This will allow the A65 crossing between Dale Eddison and Age UK to have a green man.

In order not to have a one way system on Victoria Road, the design of the new junction has been detailed and complex.  If the Victoria Road one-way had gone ahead,  Victoria Road would have been removed from the sequence, and there would have had circa 20 seconds to play with. This would have allowed the whole junction to have a red man phase and have everybody cross.  However, this would have caused other traffic issues in other parts of Guiseley.