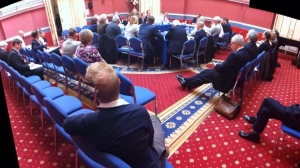 It must have been like this in the old days of Soviet tractor production meetings.   Yesterday,  in a very red room, with a very blue tablecloth,  Leeds City Council Planners,  led by Cllr Peter Gruen, Deputy Leader of Leeds City Council, faced an ideologically serried rank of developer’s agents, at a hearing to debate how the net target of 70,000 new houses (the biggest target of any local authority in the UK; para 7) was going to be delivered between 2012 and 2028 – yes, 2012 is now well past its sell by date, but such is the system. The Planning Inspector, referred to as ‘Sir’ by those in the ‘know’,  sat in the Chair of Judgement,  the NPPF,  and NPPG  (National Planning Policy Framework and Guidelines) open and ready for learned consultation.

We began; ladies and gentlemen,  should we count the regeneration of empty homes towards our housing target?   Now, you would have thought the obvious answer was ‘yes’.   Long term empty home,  often  in a run down area,  gets a new lease of life by a small local firm, a new family moves in, and,  if enough of them are done, gives back vitality to the run down area.  Common sense; job’s a good’un.

But no; not to the volume developer’s agents, there to represent the likes of Redrow, Bellway, and David Wilson Homes.  What was to be counted? -they frowningly questioned shaking their heads;  would this actually happen,  what was Leed’s record?   The tenor being, they didn’t much like this source of housing ‘pinching’ homes off  ‘their’  70,000 target.

But, still, the developer’s agents were not happy; each one popped up agreeing with his ‘right honourable developer colleague to his left’ –  “it was very debatable that ‘Sir’ should allow this, as ….” – blah, blah, blah, on and on and on; fathomless excuses.   The council answered, getting less patient as frustration set in.  And the Inspector?   He turned to the developers and, in a manner tinged with a hint of deference, asked “is that satisfactory”.

At this point, any reasonable observer would ask,  who had the responsibility for planning to build a sustainable City, complete with infrastructure, facilities and greenbelt,  on behalf of the people of that City – the elected council and their public servants,  or the developers?  Because,  it really was not clear.  And,  the reasonable observer might also ask,  where was the developers’ alternative Local Development Framework the one they were working too on behalf of their clients?  Should that not equally be scrutinised.

And so, the process went on.

The same scenario occurred over the counting of student accommodation; this, of course, releases family homes for use by families and brings ‘ordinary’ life back to streets around places like Headingly, that have become student bedsit land.

The same again,  over counting retirement and care homes against the target – the developers wanted assurance that if this figure offset ‘their’ targets that there would be no ‘double counting’  if a husband needed care, but his wife stayed in the family home.    Excuse us;  but in a supposedly needs based housing target,  the husband needing another ‘home where he can be looked after’ has been counted,  so the built accommodation needs to come off the target !!!!

And what of the little people, the real people,  the people who have to live with the ramification of all this, and the people who have been asked to do the ‘neighbourhood planning’, if they want to ‘shape the place they live’ for the better.   Well, we had been asked for our written response (if we had been to the last housing hearing in October) we were allowed to be there,   but we were obviously not an equal party at the table in the oh so red room with the oh so blue cloth, where our communities and their future were being bargained for like Jesus’ cloak at the foot of the cross.

Following the tractor statistics, came the discussion on whether Leeds should set its annual targets in line with likely market demand, the ability to supply, and, most importantly,  the ability to build the supporting infrastructure that makes a community – little things like, roads, healthcare, schools, facilities.  Let alone what has happening with infrastructure for HS2 and Leeds/Bradford Airport.

The Council made their case that they should pace this massive development of the City, “to leave a lasting legacy they could be proud of”,  as Cllr Gruen put it.  So, they had adjusted annual house building targets accordingly – lower in the early years, more in the later ones.  ‘ Did the developers agree with this’, the Inspector asked?

Of course not !!  Nothing must impede their building bulldozer – except the lack of the 20% profits they need to convince the banks to de-risk loans (para 24c).  Wanting to build infrastructure was just an excuse by Leeds (and local communities)  to ‘restrain housing growth’;  it was wicked; people who didn’t live or work  in Leeds now,  needed houses now,  this minute,  in 2012 if possible.     The Government was quite clear,  houses were needed for a growing population and they , the developers, were going to do what the Government wanted, and neither Leeds CC, or the real people, or the little children with no school to go to,  were going to stand in the way of their ‘virtuous’ cause !!

It didn’t matter to these agents for the, House Builders Federation, Leeds House Building Consortium, ID Planning, Templegate, and Miller Strategic Land,  that at other meetings on site allocations, their developer clients had told Leeds that they “are not planning and cannot plan to deliver [Leeds’] Core Strategy”.   Or, that to meet even the lower annual target, the number of sites being built in Leeds would have to increase from the current 80 outlets to between 146 to 218 outlets – and these only on the most viable land eg greenbelt !!  No,  the developers wanted carte blanche – and that, they told Stuart Andrew MP to his face, was what the Minister meant when he said in his letter of 6th March 2014,  that ‘new housing must have supporting infrastructure’, and that the housing need was unlikely to outweigh harm to the greenbelt (source: LCC, 2014, Housing Delivery & Supply; para 24 and 25).

Two participants must be particularly singled out for trying to bring sense to this pantomime – Tim Mould QC, LCC’s Barrister, and Cllr John Procter, Deputy Leader of the Conservative Group.  Both, gave responses with measure passion, and would have been put straight through to the finals of ‘Britain’s Got Talent’ – if we had been allowed to clap their contribution.  Which we had been sternly told, by the Inspector, we could not – as this was not ‘Britain’s Got Talent’ !!

So, what was the result of this, what is the outcome for a neighbourhood plan for Aireborough, that has to ‘conform’ to the Leeds’ LDF, and try and turn the ‘tractor statistics’ in a place where we can all live well, in ‘peace and harmony’?   Officially, now, we have had our say (response from the ANF with input from a number of members here) and  must wait for the Inspector from Bristol to give his judgement, and for Leeds CC to tell us how tractors are going to be counted.   However………………………..

………………….democracy was not given to the British people on a plate;  they made the case for it,  fought for it, and moulded it themselves.  Neighbourhood planning teams can do the same (maybe without the Model Army), and there are already examples of what can be achieved.

Neighbourhood plans have to be prepared positively, and based on EVIDENCE of the REAL situation,  we already have that evidence from last year’s survey – thanks to those who returned their questionnaires.  There is a real opportunity to look at inventive ways to solve our  issues, and to get a whole range of people together to discuss and work on solutions – including the council, and yes, even developers if they really want to work with local people.

The Aireborough neighbourhood plan is to be based on place-making, not tractor targets, and we would really invite everyone who lives, works or does business in the area, to get in touch (aireboroughnp@gmail.com) to help make this work.   The alternative is that we roll-over, keep our heads down in our busy lives, and accept the developer’s plan – is that what we want?   I’m not sure about beating swords into tractors, but it is time we beat the tractors into swords of justice.

ANF’s response to the Inspector