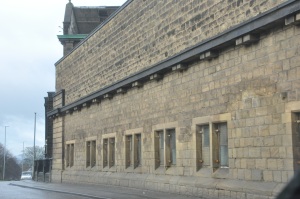 More than a facade of the mill should be conserved

That was the verdict of a Leeds Plans Panel yesterday on the development plans put in by David Wilson Homes on the Naylor Jenning site on Green Lane.   The Panel voted unanimously against the development plan in its current state,  and felt far more of the heritage should be kept.

The South and West Plans Panel was attended yesterday (18th July) by Clive Woods and myself  to hear its verdict on the officers position statement about current plans for Naylor Jennings by David Wilson Homes.

The Plans Panel had been on a site visit in the morning.

The unanimous verdict of the panel was that, there was no reason for the site not to be housing, but that the current scheme was bland, unimaginative and too ‘lego land’ in character having little relationship to its surroundings or its heritage.   The panel wanted to see far more of the heritage aspects kept,  the buildings (even more than the conservation officer is suggesting),  the chimneys (particularly the red one),  and more attempt made at keeping the feel of the ponds (maybe keeping one in some shape), even though it was appreciated that the ponds could not stay as they are if the site was to be developed for housing.   In fact, the debate came around to the idea that the site might be much better for mixed use, and that would enable more of the buildings to be retained.  They gave examples of other regenerated mill sites that had been imaginatively regenerated to be community facilities, employment,  as well as including some housing.    Which is what we have been saying all along !!

It was disappointing that the panel did not consider more carefully important aspects such as the dangerous traffic conditions on Green Lane,  the employment aspect,  the parking difficulties for businesses in the area, or the place making links – although they did feel that the site should not be a stand alone,  but well-connected to areas such as Cricketers Green,  even if that meant being imaginative about how it was done.

By the time the vote was taken the statement that “developers should  not take a bulldozer to our heritage”  was strongly supported, and the panel voted against the scheme in its current form.

One thing that had concerned the panel earlier in the day,  is that emails had been flying around from ‘the development team’,  making pejorative comments about planning officers.    However, the Panel soundly refuted these emails as a legitimate behaviour in the situation.

This week the ANF has taken delivery of a new set of workshop materials from Design Council CABE to help developers work with local communities on such schemes.   We also have the BFL12 assessment we asked the architects to do,  as a starting point for discussions with local people.    The ANF will be offering these to the developers as a way of working with them on a revised ‘scheme’.   We do very much see this site as a way for Aireborough people to be far more involved in ‘shaping the place they live’ – commonly known as localism .